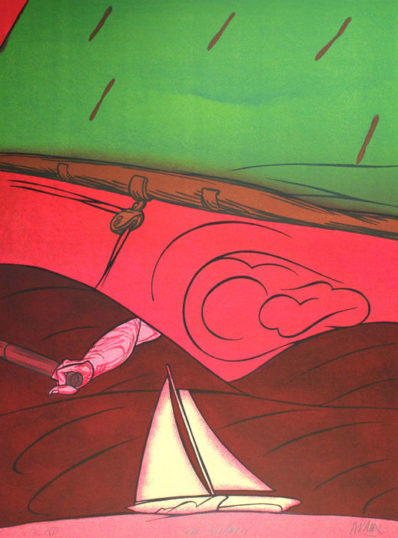 Valerio Adami (Italian, b.1935) is a painter associated with the Pop Art movement and best known for depicting historical, mythological, and Surrealist scenes using stylized outlines and flat planes of color. Born in Bologna, he studied drawing at the Accademia di Brera before moving to Paris in 1955. Adami’s early work focuses on the ruins of buildings devastated by war, and his style was inspired by Expressionism and French Cloissonism, which enclosed flat planes of color in black outlines. In the 1970s, Adami began to include in his work imagery from politics, literature, music, and mythology. Several paintings depict a stylized representation of Sigmund Freud, such as his Sigmund Freud in Viaggio Verso Londra (1973), which is composed of rectangular planes of color. Although many of his paintings allude to European culture, Adami also produced paintings of seedy public locations, such as his Hotel Chelsea Bathroom (1968). Several well-known writers and philosophers have written about his work, including Jacques Derrida, Italo Calvino, and Octavio Paz. Adami’s work is held in several museum collections, including the Centre Georges Pompidou in Paris, the Museo d’Arte Moderna in Rome, and the Museum of Modern Art in New York. He lives and works in London and Paris.
Show more
BACK TO ARTISTS